kimmie e and the tall tale of bitchassness 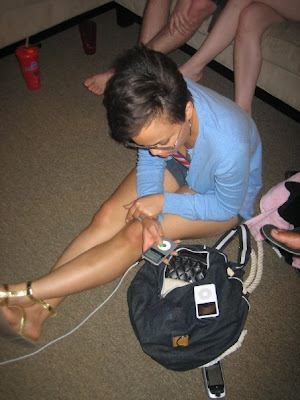 so facebook is officially boring and ive revamped my myspace a total of three times in the past two days...yea so around the way girls and missbehave are the only things that keep me company during hell hours. So i have had a very interesting morning filled with bitchassness, scandal, mischief, tension, text messaging, aim, and facebook chat- O the wonders of technology-
moving on its fucking 95 degrees and tomorrow they're trying to say its going to be 101 and everyone should just be OK with that? That's not NORMAL..when it gets hot the bitch disease comes out. Hmmm..lets discuss something...hmmmm...how about bitchassness? This is like my favorite topic in the universe because it encompasses everything stupid that someone could do. Since bitch is like my favorite word, adding "assness" to it only seems natural, right? right. So here are some ways to stop the epidemic!

how to stop bitchassness in easy steps

1. first you gotta wear the t-shirt, its like a walking billboard that u dont stand for bitch shit...nigga bitch shit, or bitch bitch shit, ya digg? and if you dont have enough money for the real shirt, get yourself a sharpie and a white t and ur good

2. dont associate with bitch bitches or bitch niggas...now this may be hard to follow considering that bitchassness can only be found out with careful observation, however studies have shown that it is hereditary and also sexually transmitted...its like chlamydia though, it can be taken care of in a few days, but its embarrassing, who wants to be a bitch for a week?

3. third, you gotta ask the question, "do you have bitchassness in you? cuz (insert name here) doesn't deal with bitchassness! there will be no bitchassness at (insert address, clique, or company name here)!" (insert person picking up there bitch face here)

4. if they don't believe that they have bitchassness within them, you have to bring up an instance where their inner bitch was shown through their outer bitch to show them how far gone they really are...i would suggest showing them their own youtube tape that they are not aware that they have.

the end...i got some "work" to do, stopping bitchassness is a full time job playas..im out

bitchassness is an epidemic, u gotta ease it out gradually.