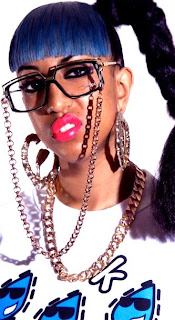 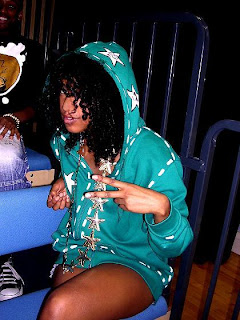 I remember way waaaaay back in the day this girl from London o so randomly friend requested my girl doe cheese...in hindsight i see that people have come a long way don't you think? Anyway that girl was Kesh...who now has become big, quite big indeed. Well personally i see her as a good role model for the thick and curvy (we can wear anything a skinny person can) as well as the big and tall (aka amazons, hot shit!). Getting to the point, Kesh is releasing some of her most coveted hoodies, via auction. If I were you (or if i were me) i'd get one. She also sells t-shirts (affectionately named "Keshshirts") as well as "keshsuits"..and all the "keshness" and" keshoodies "you could possibly want! You can pretty much learn a lot of shit about her by checking her myspace-that is if you take the time to actually read it (which you probably won't).

For starters Kesh has made clothes for Kanye West, Lupe Fiasco (my fave), Mariah Carey (ugh), and Big Daddy Kane (mad random). She made her first item of clothing by turning boot cut jeans into skinnies and putting her name down the leg (the name obsession started when she was 8, lol). Anywho her bestfriends name is Zezi, and this is only important because they DJ together under the name "The Coconut Twins". If you live in Europe your pretty much lucky (no one seems to get that Europe is the shit...). Kesh is pretty much doing big things, throwing parties in London and NYC, chillin wit indie fashion's finest, invitin Kelis to kick it, and sharing the same birthday as muah, which makes her extra sweet!

Check her out, trust me you'll learn something new.
www.myspace.com/that_girl_kesshia