u can comment without being a subscriber, just do that shit...geez people
how hard is it...

My Views on Rihanna...What You Are Afraid to Say hahaha 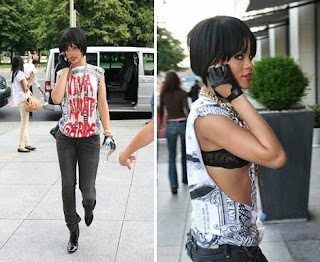 So Rihanna has a new album, Good Girl Gone Bad. Paired with the album is a whole new image she has popping off. She drops 10 pounds, cuts her hair ( don't get me wrong it is a wicked haircut), and dawns herself in bondage wear and black clothes. Does this really exemplify bad girl behavior.......ummmmm noooooooooooo! She has a punk look but a pop sound? Maybe Im just not understanding the marketing strategy hehe

the DONTS of hood wear

the crime:
recently ive had an unfortunate relapse back into the era of "hood wear" or "mondawmin wear" as we like to call it here in baltimore...i mean so sue me, it was a lettermans jacket, and it was HOT PINK, a color which i adore, but unfortuantly it had "RW" on it..(sigh)...i mean there is nothing wrong with hood wear, street wear whatever...shit there is something wrong with street wear..its an abomination to clothes everywhere, i mean baby phat, rocawear...come on, wore them in like seventh grade or elementary school. There is a way to do street wear and there is a way to NOT do street wear and those brands my friends are prime examples of how NOT to do street wear...Jay is the greatest, but he shoulda kept his claws outta the fashion industry.

ANYWHO, a semi-new brand has emerged to rank itself with the likes of southpole and all that other mumbo jumbo crap u can buy at macys...its called LOT 29. LOT 29 is a new streewear component that adorns innocent white cotton shirts with cartoon characters such as sylvester, tweety, bugs, u get the idea. the "spokesmodels" are none other than the trash talkin juelz santana, 3lw, and melyssa ford---i think thats her...well the clothes are absolutely wretched and were recently featured in MISSBEHAVE, it all left me asking WTF????? r u guys on a stronger crack now? i mean i love love love missbehave and all it has to offer, but LOT29? come on and ger real...like seriously. are we actually supposed to walk the streets...LIKE THAT? i mean why dont we add some apple bottom jeans a string for a headband and a fake coach bag to the mix while we're at it????? and then get our boyfriends to wear FUBU and GUnit...

verdict: 5/5 dueces and a 50 dollar gift card to nordstroms so u can try and redeem urself

this should b ur new blog bible....

here at queenie valentine we pride ourselves in talking shit about well EVERYTHING...but really we call it "speaking the truth"..so yeah if we give two cents about u we will write..This blog stemed (excuse the spelling) from a rondevous in barnes and noble, while sipping on freshly blended vanilla beans in Baltimore, it went a little sumthing like this:

and with that "queenie valentine" was born...now how we got the name is a secret, lets just say we discussed it over number 6's from wendys, then carried it in our stomachs for nine months-figuritively speaking.... we're pretty cool chicks, down to earth in every way, pretty hot too, educated, fabulous, and kinda mean-on tha low-but hey u love us and we love you(in an abstract kinda way)...so we hope u enjoy, and if not welllllll who really cares right? right. at least we like to think that we dont care, but maybe we doooo....