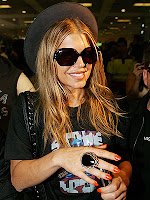 From Porky pie hats to denim overalls, Fergie style has finally improved. As her solo album, The Dutchess dropped late last year, Fergie vamped up her style but still kept that boyish charm to her look. She loves skinny jeans, vintage t-shirts, and baby doll dresses, but you can always catch her in an Adidas track suit. She also mixes in leggings and vest with her tomboy look. Her style is 80’s slash rock n roll with a flair. I dig it and it is a major improvement from her my hump days. 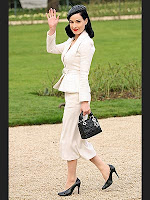 Dita Von Teese is the ultimate retro chick. With red lipstick and sky high stilettos, Miss Von Teese knows how to work the vampy pin-up look. Yes she is a burlesque dancer, but off the stage Dita Von Teese is a pretty classy lady. Always in a dress Miss Von Teese is the epitome of elegance. With corsets, pencils skirts, and perfectly glam hair, Dita's style is not for the faint of heart. O...and the occasional piece of lingerie doesn't hurt either hehe.

Get Off Her Vagina (literally for some of you): The Paris Hilton Edition 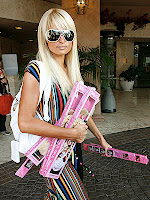 WTF! Instead of the normal “Shots Fired in Baltimore County” or “The War in Iraq Continues” flashing across my screen I see “ Paris Hilton Just Released From Jail.” I am so damn tired of this coke whore being on every channel and on the front of every magazine. Why is she famous? O yes let me see for a porn tape, a tiff with her best friend Nicole R., and a Chihuahua. I can find that type of the chick down the street! She is a skinny blonde chick that hangs unflattering designers smocks on her thin frame that she bought with daddy’s Amex, yet little prepubescent teeny boppers worship her. She has a book, a television show, a hair weave line, and fragrance. O and don’t forget One Night In Paris hahahaha. Paris Hilton should not be every blonde little girls idol. Furthermore she needs to be an example of what not to be when you grow up.

During her stay in jail for like 23 days she cried of sleepless nights, how horrible jail was, and her “condition.” This is a load of shit! When Paris was released from jail she said she would reform her ways by staying out of the club and doing charity work. A bunch of b.s. in my opinion. She has yet to do any charity work and still shakes her no having ass in the hottest clubs in L.A. Well she has already shown her vagina to the whole damn world, but still get off her vagina!!!!!!!!!!!!!!!!!!!!!!!!

Labels: Get Off Their Ish, Paris Hilton