So I've been on my political shit this semester and I'm telling you everyone should hop on. I was at work today, doing my usual surf of generic "semi-department" stores, like urban outfitters, and I got bored because everything looks the same (except for this sequined skirt I've been hunting for a few months) so I decided to google urban and see what crazy shit I can conjour up about the multi-million dollar company. I was utterly suprised, it turns out that husband-wife CEO duo of the company are ultra conservativde republicans and use a generous portion
of their funds in supporting Republican candidates. The kicker is that certain shirts, such as the "obama for yo mama" and the "hilary is my homegirl" shirts are pro-democrat, but the purchase of these shirts help to support REBUPLICAN campaigns! Wtf? Its a conspiracy I tell you! The store aims to target college students, into the new age thrifty, bohemian looks-who are mainly liberals-but yet they use our dollars to fund conservative one sided bullshit! Why don't they make clothes that cater to young republicans like polos and pearl necklaces, instead of fooling their demographic that the owners are rasta living, bohemian-esque, weed smokers, who make clothes to cater to people like them. At this rate, the owner of Abercrombie and Fitch is probably a Green Party member!

To find out more about corporate scum, urban, and CEOs who use poor children in India to make their clothes or are potentially funding the Darfur genocide go to www.corporatescum.com or google that shit!
--originalbeautie

LL the next Marilyn Monroe? 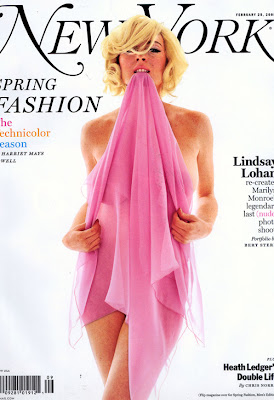 We all know that Miss Lohan idolizes Marilyn Monroe. She bought her apartmant, her paintings, and articles of clothing. Now she is posing like her in New York Mag.