going green with the queen:"eco-fabulous..ity"

Last night I had the great awesometastic opportunity to see Wall.e, the Disney flick. It was like beyond good. It had a message and everything..fat people and robots-a winning combination. I give it 8 disney stars, 9 pixar stars, and 10 green stars. I mean the people were soooo fat that they couldn't move and all they could do was sit, watch tv, sleep, and eat fast food, it was like a picture of the future, an accurate obese picture of American 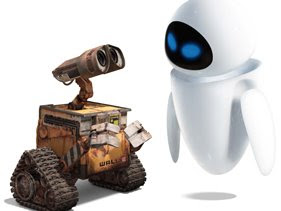 living. I'm sure all the fat people in the movie were somewhat offended, they went so sick with the fatness lmao. I was shocked that Disney went so hard with their social message. Their "g status" flew way way up, if they would have said something about the cracked out gas prices, i would have flipped my shit. However, the movie did poke fun at the US government and big discount superstores, which compensated for the lack of gas price humor. Wall.e screamed, "hey people, we're fucking up the planet!", and i screamed back, "So So true!" 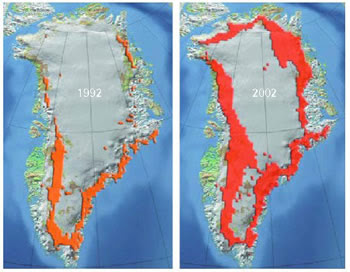 I read in Rolling Stone, that the ice in Greenland is melting away at this "alarming rate" because of global warming...the shit is real sons and daughters...not just for tv, the earth is really overheating (the red shit in the picture shows the melted ice..its of epic proportions!). According to the Stone, sea levels will have risen about 3 feet in the next few years, meaning that the East and West coasts will get smaller and smaller (noooooooooo). I also found out that the earth can naturally support 30 billion people, and we're around 70 billion. I'm not saying that we should line everyone up and shoot them like nazis, but just think about it, we're really wearing her down. She's tired, and she can't just go to 7-11 and get a pack of red bull to perk her up! Get Green people...even Kimora's doin' it-ghetto fabulous style, carbon footprint and all that shit (see below).


i've taken the liberty of helping you go green with me, here are some sites with some tips:

10 ways to go green and save money
think green
wall.e